Midwife with a special interest in complex normality, especially breech.

We are thrilled at the interest these pins are receiving. We have created them to make it easy to identify people who have attended our Physiological Breech Birth study day and are either on a breech team or working with Breech Birth Network to create a breech team in their work setting. More information below, with the form to request pins at the bottom of this post. We are going to maintain this criteria strictly so that it is meaningful, but we will consider additional designs in the future.

In a few weeks, we will receive our new breech team pins from @madebycooper, based on our Breech Birth Network training booklet cover image by Merlin Strangeway (Drawn to Medicine).

We have created these pins because my research (Walker et al 2018 — open access version) indicates that the three elements which develop and sustain expertise in breech birth are:

Expertise is generative — it generates comparatively good outcomes, and confidence and competence among colleagues. The role of a breech team is to develop expertise in order to support the entire team to support vaginal breech births safely.

Our breech clinic is 9 months old and we did our 50th ECV today!
27 were successful (54%)
20 women then had vaginal deliveries, 4 caesareans, 3 births pending!
24 elective caesareans.
And 8 vaginal breech births.
Supporting maternal choice all the way @RLHMaternity

Breech teams enable the development of expertise within organisation because team members  work flexibly to attend breech births when they occur, enabling them to acquire clinical experience. Once new team members develop their own skill and experience, they continue to attend births as an extra layer of support for the wider maternity care team, maintaining their own expertise while promoting confidence and safety.

Some Trusts have a specific on-call system. But most find that making their breech team visible is enough to introduce cultural change supporting the development of expertise. One simple way to do this is to designate a breech team (including obstetricians and midwives) and post a list of people and how to contact them in a prominent position on the labour ward. Make it an expectation, backed up by the Trust guideline where possible, that someone from this team is involved in any episode of breech care wherever possible. Sometimes it is not possible. But most of the time it is, even without a rigid on-call system.

A team member should be involved from the moment a term breech is diagnosed, whether antenatally or in labour. Individuals who have developed generative expertise counsel very differently from those who are still developing their skills or are not keen on breech birth. “Facilitating an informed consent discussion that demonstrates respect for maternal intelligence and autonomy, while being realistic about the inability to guarantee a perfect outcome” is also a skill that develops with practice (Walker et al 2016, p11 — open access version). 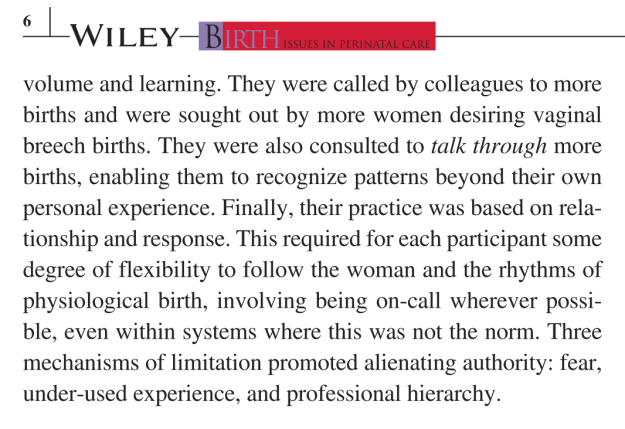 These pins will increase the visibility of breech teams by reminding women that physiological breech births are supported, countering negative portrayals in the media and social discourses of risk, and remind maternity staff that involvement of the breech team is available and expected.

Breech team lanyard pins will be available for FREE from the Breech Birth Network, CIC. To wear the pins:

To order pins for your team, contact us using the form below.

You and your colleagues may be interested in these two upcoming conferences, led by obstetricians. First, a two-day breech conference in Denmark featuring a number of internationally known teachers and researchers: 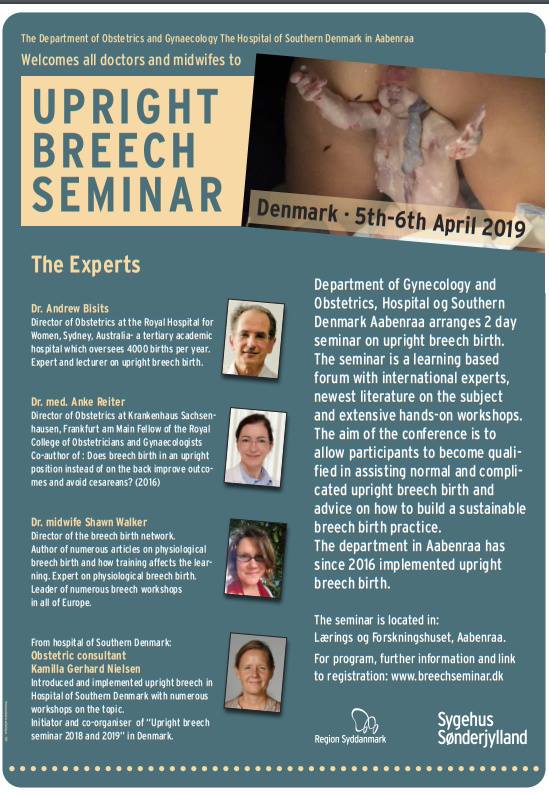 And in November, Breech Birth Network will be offering physiological breech training alongside the British Intrapartum Care Society Conference in Leicester.

We are seeking your thoughts on two new pieces of research currently in the development stage. If you have experienced a breech pregnancy within the last 5 years in the UK, either yourself or your partner, or you work with pregnant women in a non-medical capacity (e.g. doula, antenatal teacher, breastfeeding supporter, etc.), we would love to hear from you.

Emma Spillane would like your feedback on an Information Leaflet for people pregnant with breech-presenting babies. The leaflet will be used in research to determine an approximate level of demand for vaginal breech birth, with balanced counselling and adequate support.

Talking through elevate and rotate

Shawn Walker is preparing an application for a large grant to fund a pilot randomised controlled trial. No term breech trials have been published since 2000 (Hannah et al). The team around this project would like to gather a Breech Advisory Group composed of people who have experienced a breech pregnancy within the last 5 years in the UK, either yourself or your partner, and non-medical birth workers, such as doulas and antenatal teachers. At this stage, we would like your feedback on the suggested design of the trial, to ensure that the information resulting from the research will be useful to those considering breech options. For those of you who would like to remain with the project if funding is obtained, we will send regular updates with opportunities to provide feedback at stages like final project design, advertising the trial and analysing the results.

If you are interested in participating in our research in this way, please complete the form below and one of us will be in touch.

“We believe that we do well what we do often.” – Caroline Daelemans

This month I visited Hōpital Erasme, in Brussels, Belgium. Led by Lead Obstetrician Caroline Daelemans, Erasme began to offer a dedicated Breech Clinic in December 2015. Much of the organisation and development of the clinic has been done by Dr Sara Derisbourg, who continues to research the impact of instituting a dedicated breech service.

I came to Brussels to provide our usual physiological breech study day. The breech team has transitioned to using physiological methods, including upright maternal positions (Louwen et al 2016), after attending training in Norwich in 2017. They now needed the rest of the team to understand the philosophy behind this approach. But the day began with Caroline describing the impact of instituting a dedicated Breech Clinic, and this was particularly exciting for me. 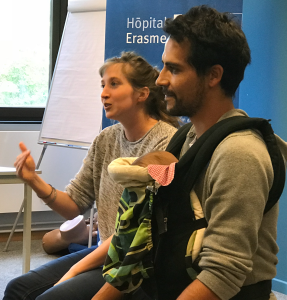 My own research concerning the development of breech competence and expertise, and the recovery of these skills within a service, indicates that developing a core team with significant experience is the most effective method of safely offering a vaginal breech birth service (Walker et al 2016). This skilled and experienced core is more important than the ‘selection criteria’ that are used to predict the likelihood of a good outcome (but in fact are not very predictive). Skill and experience facilitate good outcomes and enable other colleagues to develop competence (Walker et al 2018). The Erasme team even encourage other health care professionals to come with their clients and attend them in labour with their support, to encourage the growth of breech skills.

The need for new ways of organising care has been emphasised in an on-line survey of Dutch gynaecologists just published by Post et al (2018, Does vaginal breech delivery have a future despite low volumes for training?): “Potential suggested alterations in organization are designated gynecologists within one centre, designated teams within one region or centralizing breech birth to hospitals with a regional referral status. Training should then be offered to residents within these settings to make the experience as wide spread as possible.”

Daelemans and Derisbourg began with a small team of 5 people. This has gradually expanded and now includes eight members who together provide 24/7 cover for all breech births within the hospital. Women with a breech presentation are referred by colleagues and increasingly by other women. The environment at Erasme is ideal because the hospital has a very positive approach to physiological birth in general, and a 15% overall caesarean section rate in 2017. This compares to 20.2% in Brussels and much higher in many places globally. 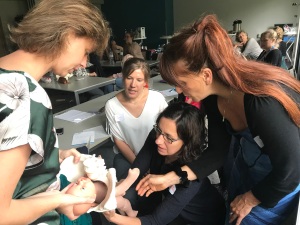 All of this is very impressive. The message is clear: a physiological approach and an organised care pathway, including a breech clinic and experienced on-call team, can reduce the caesarean section rate significantly without negatively impacting neonatal outcomes. We should all look out for Derisbourg’s papers when they are published.

If you are a woman seeking support for a physiological breech birth, or a health care professional looking to refer a woman to the breech clinic, they can be contacted on Tel 00 32 2 5553325, or siege.clini-obs @ erasme.ulb.ac.be. Caroline Daelemans will be teaching with me in Lewisham, London, on 12 November.

This month I am in Hyderabad, India, visiting Dr Evita Fernandez and UK Consultant Midwives Indie Kaur and Kate Stringer. Today at 5pm IST (that’s 11.30 GMT), we will be having a Facebook Live discussion on Breech Birth in India. This will be followed by hands-on workshops on the 12th and 19th in Hyderabad.

with Senior Midwives Theresa and Jyoti

The Fernandez Hospitals are at the forefront of compassionate maternity care on a large scale in India. The Stork Home facility has been beautifully designed and rivals some of the best midwifery units in the UK. But Dr Evita and her team of doctors and midwives are very ambitious. They want to revive vaginal breech skills so that women can confidently choose this option. How will this work in Hyderabad? Join us for a discussion.

From Arunarao: “My special thanks to dr Evita ,lndie mam Kate mam and Shawn mam for the opportunity to participate in BREECH BIRTH WORKSHOP at karimnagar.i am so panic about breech presentation and breech birth before I come to professional midwifery training, know iam very excited to assist the spontaneous and assisted breech birth,because now I came to know breech also has its own mechanism and always always we have to respect those mechanism and iam aware of the manoeuvres to apply whenever it’s needed.thank you all of you mam iam so blessed to have a teaching faculty like you.” Thank you Arunarao — you really got it! 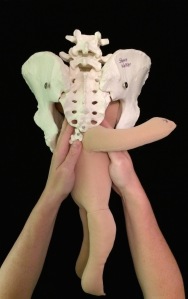 In June, I spent a week in the Netherlands working with a committed group of lecturers. The midwifery universities of the Netherlands share a common curriculum, and following our meeting last year, they agreed to incorporate physiological breech birth into their training programme. My visit was to support the midwifery lecturers to implement the new skills into standard midwifery training.

While in Amsterdam, I collaborated with Midwifery Lecturer Bahar Goodharzi of Academie Verloskunde Amsterdam Gröningen (AVAG) to create a short series of films demonstrating the rotational arm manoeuvre we teach in Breech Birth Network study days. We agreed that this is a tricky manoeuvre to learn and teach, but it is incredibly effective in practice so worth the effort of learning. I’ve collected our short demonstrations in the film below, along with information about how to recognise that this manoeuvre is required.

Note: If you have difficulty rotating the baby initially, you may have to elevate the baby slightly to a higher station, so that the shoulder girdle rises above the pelvic inlet. It can then rotate to engage in the transverse diameter.

Thank you to Emma Spillane of St George’s Hospital in London, who has helped to refine the way we teach this manoeuvre following her own experiences of successfully using it in practice.

For a poetic description of what it is like to encounter this complication for the first time as a midwife or doctor, read Nicole Morales’ blog, The prose of no rotation and no descent: rotating to free the arms.

You can download the Physiological Breech Birth Algorithm here.

Midwifery Lecturers of the Netherlands, June 2018 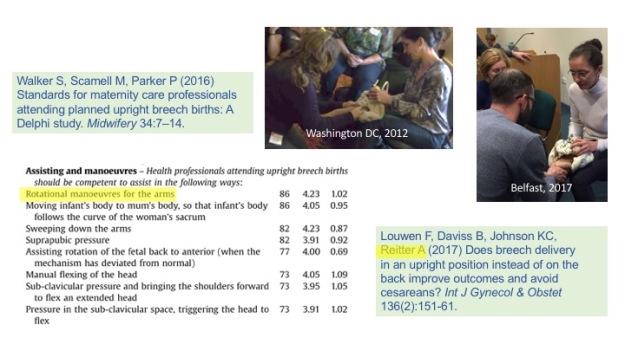